I don’t know about you, but I have this absolute plethora of awards from high school that have been sitting and gathering dust for years in the bedroom of mine at my parents’ house.

Most of them are an accumulation of various accomplishments I was honored with throughout my four years of high school band (shout out to all my fellow flutists out there!), though there are also some from my two years of high school speech, academic achievements such as National Honor Society, and the like.

Part of me doesn’t know why I keep these awards…though they were meaningful at the time, they really do take up a lot of space and don’t have a whole lot of value to me anymore. Yes, receiving marcher of the year in tenth grade marching band was a dream come true–after my entire freshman year of marching funny, or so people END_OF_DOCUMENT_TOKEN_TO_BE_REPLACED

Either give me more wine or leave me alone.

It was rainy when we arrived on Inishmore, the largest of the Aran Islands, via ferry. We only had one day there, yet we had started it off on a bit of a low note. Our advisers wanted us to ride the bikes we had rented across the island to see an ancient ruin, but many of us were off put by the rain. I, for one, was unbelievably crabby. Having not felt well the day before, I had barely eaten anything within the last twenty-four hours and I was starving. So, I took my sour mood out on the rain and the biking and our advisers.

We biked across the beautiful landscape–oh, and was it beautiful–but I had trouble enjoying it because of my mood, a result of the gnawing hunger in my gut. When we finally arrived at an area populated by small artisan gift shops and a few cafes directly below the ruin, which we had to walk up to, a group of us decided to skip the ruin entirely and instead found the nearest cafe. Being afraid of heights, I wasn’t too upset about missing the ruin–even as the history nerd that I am–because it was perched high on a cliff. We ate a hearty meal at the cafe, relishing the hot food we were served after our cold and rainy bike ride. After eating, I felt so much better; being in a much better mood, a jaunt around some of the artisan shops seemed the natural next thing to do. The Aran Islands are famous of their wool products, which we certainly admired in the shops. I bought some mittens (kids size because my hands are so small) to make the bike ride back easier–my hands had gotten so cold on the ride there, being exposed to the rain as they were (which inevitably made me even crabbier).
END_OF_DOCUMENT_TOKEN_TO_BE_REPLACED

A doe stands guard over her fawns

Forever alert as her babies rest

Only time will tell 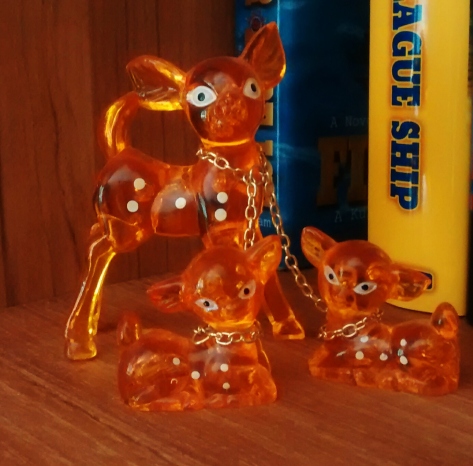 Mom: It was a little something I thought was cute.

Me: Yeah, I guess. I don’t know what to do with it, though. Plus, I kind of hate when books are destroyed, even for the sake of art.

Back in March (a.k.a. my birthday month) my momma sent me a birthday care package at school with a bunch of little things in it, including this little trinket–a “B” constructed from an old book. It really doesn’t have a purpose besides being cute and fun. Basically, the definition of a trinket. Well, at least my definition. That said, as a lover of real, paper books, it really does pang me when books are destroyed. Yes, I know there are more pressing problems facing our civilization than that of the unsold, stripped books of the world being brought to pulp. Can’t a girl be passionate about her books, though? REAL, TANGIBLE BOOKS ARE BEAUTIFUL THINGS. ALL OF THEM. EVEN IF THE STORY END_OF_DOCUMENT_TOKEN_TO_BE_REPLACED