I met my German friend in Spanish class when I was fourteen, the September of my freshman year of high school. After spending the first 9 years of my schooling at a small, private Catholic school where the majority of the 50 students in my eighth grade class had shared those 9 years with me, starting off at a large public high school was intimidating, especially for an introvert like me. The first semester of high school, I clung to a fellow introvert and friend from my parochial school–we were essentially attached at the hip. With the exception of my German friend, who was my first new high school friend, it wasn’t until second semester when I started to expand my horizons and develop more friendships.  My German friend and I got to know each other and spent a lot of time with each other in between classes. Unfortunately, her U.S. visa was only valid for three months rather than the typical year that high school exchange students spend abroad, and she was back to Germany in December.

We managed to keep in touch in spite of what we both viewed as her premature departure from the U.S. This was before I had a Facebook (that came later on during my Freshman year, and we did connect there eventually), but we e-mailed each other and had each other’s street addresses. We both had (and still have) an affinity for letter writing, and we would send letters and postcards to each other. She sent me multiple postcards from her travels around Europe, and once a big box of German Chocolates. When I started college, I sent her a pair of mittens with my university’s logo emblazoned on them. We even had an opportunity to see each other, albeit briefly, when I toured Germany with my high school band in 2011.

In college, we lost touch, as sometimes happens. Yet, we we’re still connected on Facebook.

Last year, my brother happened to move to her hometown in Germany for an internship. When my family decided to visit him last summer, the perfect opportunity to reach out to her surfaced. After all, I couldn’t travel to her hometown without trying to see her. She was delighted at the prospect of meeting me on her home turf, and we made plans. On a day that my family took a day trip to a site I had already seen on my high school trip to Germany, I took the opportunity to spend the day with her. The last time we had seen each other was in 2011, and it was so special to reunite. She took me around and showed me sites off the beaten path, and I marveled at being able to view the places she had grown up around through her eyes.

Since then, we’ve managed to keep in touch more frequently. When she brought up the possibility of traveling to the U.S. over her spring holiday, I jumped at the opportunity to join her. We hadn’t been in the U.S. together since she left Minnesota in 2007, and if she was coming over, this was the perfect opportunity to make plans together. Because I was still substitute teaching in May when she was planning to visit, we opted to stay closer to my home for this trip. She had also never been to the East Coast, so this was a perfect opportunity for her to see a lot of new places. We met in Baltimore and spent the weekend there, came back to DC for the week so I could get some subbing in, and headed to New York City for a long weekend.

What a joy it was to explore the East Coast with her. We had a wonderful time in each place. I hadn’t been to Baltimore in years, but wasn’t expecting much from it–it was more a convenient place to meet when she flew into Baltimore-Washington International Airport than anything. We ended up both being delightfully surprised by Baltimore. Our AirBnb host was phenomenal with giving out insider tips, and we had a lot of fun exploring it. Coming back to DC was such a treat, too–I love showing people around my adopted city, and showing her around was nothing short of fantastic. Furthermore, I had never been to New York City before–the city was new to both of us, and we revelled in doing as many touristy things as possible in our short time there. We had two full days there, which is NOT enough time to see all of New York. We made the most of the time we had, though, including a full set of touristy selfies on the Brooklyn Bridge. 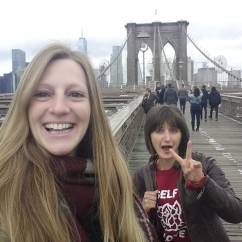 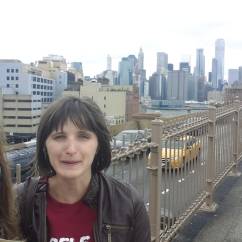 I remain forever grateful to have such a wonderful cross-cultural friendship. I learn something new every time I’m with her, and I love expanding my sometimes unintentionally Americentric perspective with her.

She expressed to me that one of her biggest regrets was not staying a full year in Minnesota back in 2007. While it would have been so wonderful to spend more time together back then, something pretty incredible grew out of the three months we spent in Spanish class as it is.

Living on different continents certainly makes seeing each other more difficult, but it also makes it more meaningful. I cherish those moments with my German friend all the more, because I know they’re not my everyday. Despite that, we do hope to make our visits to each other and travels with each other a bit more frequent than we have in the past decade. I’m looking forward to more travels and adventures together down the road. Cheers to friendships that span the globe, and to the new perspectives and experiences that come with them.

7 Replies to “On Cross-Cultural (and Continent) Friendships”