When I was planning my trip to Sukhothai, I knew I wanted to stay there for a few days. While I knew Sukhothai Historical Park was the main attraction for visitors coming to Sukhothai Province, I decided to look into other things to do in the area to keep me busy for the entirety of my stay. When I travel, I like to spend at least a few days in a given area. I tire easily (a reality of being a highly sensitive person) and I also like to take time to really get to know and appreciate an area. I’d always rather see less overall on a trip and take in as much as I can in one place than constantly be moving from place to place. During my trip to Sukhothai, I was satisfied to just explore the town of New Sukhothai on one day and had Sukhothai Historical Park planned for another day. Given that I had three full days in Sukhothai, I wanted to find another adventure to go on elsewhere in the province for the third day.

Enter Si Satchanalai. Si Satchanalai (more commonly know as Si Satch by the locals) is a district in Sukhothai Province about an hour north of New Sukhothai, the capital city of the province. It is home to Si Satchanalai Historical Park, a veritable treasure trove of gorgeous temple ruins in a wooded and rustic setting.

Si Satch was the sister city of Old Sukhothai and the administrative center of the Sukhothai Kingdom.

Lovers of history and architecture and those travelers intrigued by sites off the main tourist path will love Si Satch. It’s a bit out of the way and requires more planning, more walking/biking, and definitely more water (a mistake I ran into that I will get to later), but, as someone who is both a history nerd and appreciates places outside the main tourist path, I absolutely adored Si Satch–and came away with a few lessons about solo travel along the way. I wouldn’t recommend going to Si Satch in place of Sukhothai Historical Park–you’d be missing out on a lot of really great sites and culture by doing that–but if you have an extra day in Sukhothai Province and aren’t put off by spending two days in a row visiting ancient cities, I definitely recommend the trip to Si Satch; it is an absolute gem of a place. Overall, I found my experience at Si Satch more rewarding than my visit to Sukhothai Historical Park and I personally liked the park at Si Satch better–because there were less tourists and the park itself feels more secluded.

I started off my day early in an effort to make it to the Sukhothai bus station at a reasonable hour. You can easily hop on a bus headed to Chiang Rai–when you ask at the ticket counter, just tell the teller that you will be headed to Si Satch. I actually ended up taking a local bus–I’m not even sure what its final destination was because the destination at the top front of the bus was in Thai. My ticket, which I bought on the bus, cost 45 baht ($1.28 USD). When we arrived in Si Satachanali town–a tiny little hamlet–the bus driver made sure I knew to get off. I very quickly found myself in the company of four Chinese tourists who were also heading to Si Satch. One of them spoke pretty fluent English and he invited me to come with them, which I did. A little company couldn’t hurt!

I’m actually glad I met up with them; the historical park is about five kilometers away from the bus stop. I had read online that there used to be bike rental places near the bus stop but that they no longer were there; so, I was planning on walking to the park. However, my new friends did some investigation into bike rentals and we actually found one right next to where we were let off from the bus. There was no sign, so we never would have known had we not inquired. However, we ended up with some pretty nice bikes for the day–at 50 baht a piece ($1.42 USD). Compared to the rickety bike I had the day prior at Sukhothai Historical Park, this bike was a dream to ride.

We then headed across a small pathway next to the bike rental place and crossed a small, rickety bridge over the Yom River. Once across the river, we found ourselves facing Wat Phra Si Ratanamahathat Rat Chaworrawiharn. Outside of the main gates of the park, Wat Phra Si Ratanamahathat Rat Chaworrawiharn is an earlier temple, more in the Khmer style than the Sukhothai style of architecture. Given that it’s a major temple outside the main gates, it did cost a small fee–we paid 20 baht($0.57 USD) at a small stand across the street from the entrance. Upon exiting the bridge, the small stand was directly at our left. We spent a short while exploring the wat: 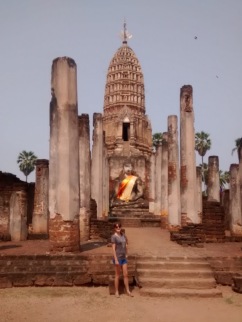 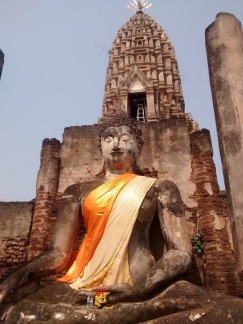 After visiting Wat Phra Si Ratanamahathat Rat Chaworrawiharn, such a magnificant structure, I was in awe and excited to see the rest of the park.

It would, however, take us a bit longer than anticipated to get to the actual park. My newfriends and I got a little bit lost because a Thai police officer–who stopped us on the road simply because he very eager to take pictures with foreigners–told us to go in the wrong direction. Despite the fact that we had a map that we could have easily read, we though–ay, he knows the area, we can trust him. NOT SO. We ended up toodling around the Thai countryside for a little bit. I tried asking some Thai women for directions with the minuscule amount of Thai that I knew and though they tried to help, a lot was lost in translation. While my new friends were looking at maps of their own, I got Google maps out on my phone and together we figured out where we were supposed to go. Despite the fact that we got lost, I really enjoyed my adventure through the Thai countryside. Even though I lived in a small town in Thailand while I was teaching, the province I lived in was a bit more industrialized than the majority of provinces in Thailand because of its proximity to Bangkok–most capital cities and major thoroughfares in Thailand are well-built up, too–so biking through the back roads of Sukhothai Province was a really enriching experience for me. 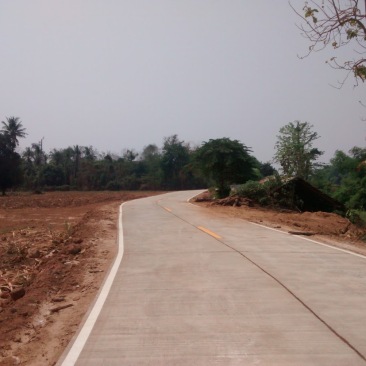 One of the rural roads we biked down

Once we found ourselves on the right track, we made a stop at Wat Khok Singkaram, which is on the road leading up to the turnoff for the park.

After some more debating about the direction we were going in, we finally found the turn off for the park entrance. Once at the park, we paid the 100 baht ($2.84 USD) admission fee and headed in.

Not only are there less people at Si Satchanalai park–though there were a few tourists groups there, they were mostly Thai (I only saw one other westerner while I was there) and nothing like the onslaught of people seen at Sukhothai park–but the park itself feels more secluded. The city wall still surrounds most of the park and many of the smaller temples themselves are hidden from each other by trees. Being at Si Satch felt sort of like finding oneself in a fairy tale–given the wooded nature of the park and these gorgeous historic structures tucked in here and there.

Our first stop was Wat Khao Suankhiri, a temple that required biking up a huge hill to get to the base off, and then additional stairs that we needed to hike to get to the top. While most of the park is flat, this is the one area of the park that has a major difference in elevation on the road. My new friends decided they were too tired to hike up to see the mountain, but they waited for me as I did. What a gorgeous view I was rewarded along with a lovely temple. 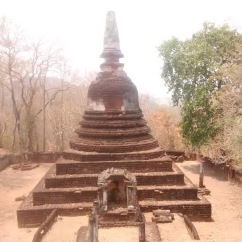 A smaller stupa taken from the main stupa 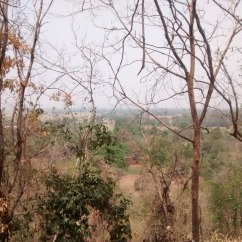 The view from the top

Now, this is the part where my royal water mess up became apparent. While in Thailand, I became accustomed to carrying these huge water bottles–readily availabe at 7/11–with me everywhere. However, to save room, I only brought a smaller water bottle that I could easily fit into my bag with me to Si Satch. I reasoned that I could easily find a place to buy a new water bottle when I ran out. However, I had gotten caught up with adventuring with my new friends that I forgot about water. Given that I had already ridden a long way on my bike in the heat, I finished the last of my water while I was visiting Wat Khok Singkharam. After biking up the huge hill and hiking up the stairs, it was necessary.

I remained optimistic that I would be okay, but after returning to my bike and continuing on with my new friends, I began to feel really shaky and dehydrated. I eventually told my travel companions that I had to go find water and booked it out of the park in a dehydrated, shaky, flurry. I knew there were market stalls outside the park entrance, so I rushed there and quickly bought a huge bottle of water, drank from it, and laid down on a bench in exhaustion for a while. After I felt a bit better, I met up with my new friends for lunch; after lunch, I decided to explore more of the complex by myself. I was grateful to have met some travel friends, but I also went to Si Satch excited for a complete solo experience–so I continued the afternoon by myself and was able to see some absolutely amazing sites.

As it was nearing 3:30, I started to think about heading back to catch the bus back. I had read that the last bus to Sukhothai town came by at 4:30 and I didn’t want to miss it–I decided to give myself an hour to get back to the bus stop so as to make sure I was going in the right direction, given that we got lost in the Thai countryside on the way TO the park. I ended up stopping at a small coffee shop on the main road for a sweet tea–I was still feeling very shaky despite the water and was wondering if my blood sugar was low–and then eventually (after getting a tad lost) found my way back to the bus stop, where I again met up with my new friends for the bus home. The bus came shortly after 4:30 and I was back in New Sukhothai within the next hour.

What an amazing adventure I had had to Si Satchalani. I met new friends, got to see an amazing historical site, and learned the value of depending on oneself as a solo traveler. Although my frazzled search for water was unfortunate, I see it as a learning experience. I am so glad I made it to Si Satch as this place is truly amazing. The ancient ruins of  Sukhothai were awe-inspiring, but Si Satch–because of its secluded nature off the main tourist path–was absolutely SPECTACULAR. 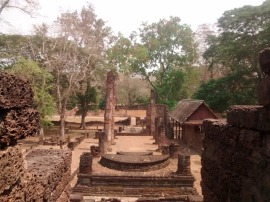 Wat Nang Paya from inside the stupa

Trying to selfie with Wat Chang Lom in the background

This is part three of a three-part Sukhothai series. Read Part 1 here and Part 2 here.

5 Replies to “A Day Trip to Si Satchanalai”