Nakhon Pathom is the small province I lived in for five months when I taught English in Thailand. Bordering Bangkok to the west, it’s an area brimming with history and culture, though not one that is visited often by travelers coming from outside of Thailand.

While most tourists and expats alike venture through Nakon Pathom from Bangkok on their way to neighboring Kanchanaburi–a well-known tourist destination because of its magnificent national parks and the history it holds as the location of the famous Death Railway Bridge–they don’t realize the rich culture and history they are passing by in Nakhon Pathom.

Nakhon Pathom certainly doesn’t have the same allure as other destinations close to Bangkok–such as Ayutthaya, home to the ruins of the second capital of Siam; Kanchanaburi; and Koh Samet, the closest island to Thailand’s captial city at three hours away. That said, its rich Buddhist history makes it a prime stop for those especially interested in history and/or Buddhism. Those travelers who enjoy destinations off the main tourist path will also appreciate Nakhon Pathom for the rich culture present in this area without being downtrodden by the high prices and destructive nature tourism oftentimes brings to local environments.

When not stuck in Bangkok traffic, it takes about an hour to get from the heart of Bangkok to Nakhon Pathom city. A visit to Nakhon Pathom could make an easy day trip, but for those interested in traveling more extensively around the province, there are hotels located in Nakhon Pathom city as well as accomodations at Sampran Riverside. That said, you probably don’t need more than two days here.

Highlighted below are a few of the sights worth seeing in Nakhon Pathom: 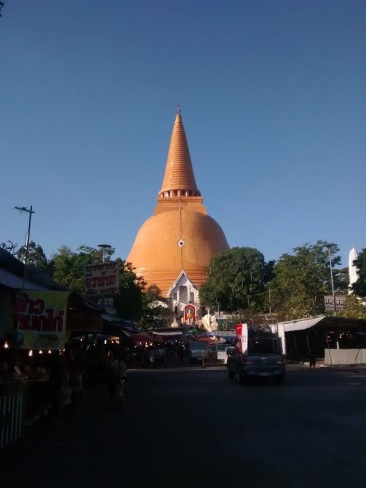 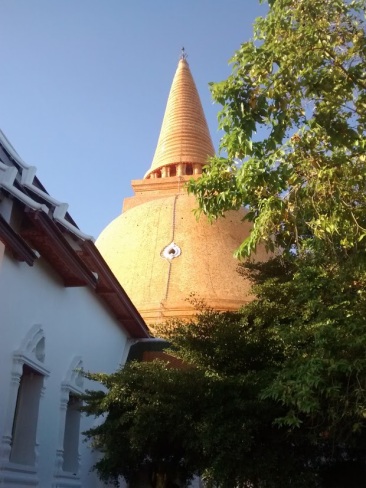 The stupa up close

The circular path inside the wat directly beneath the stupa 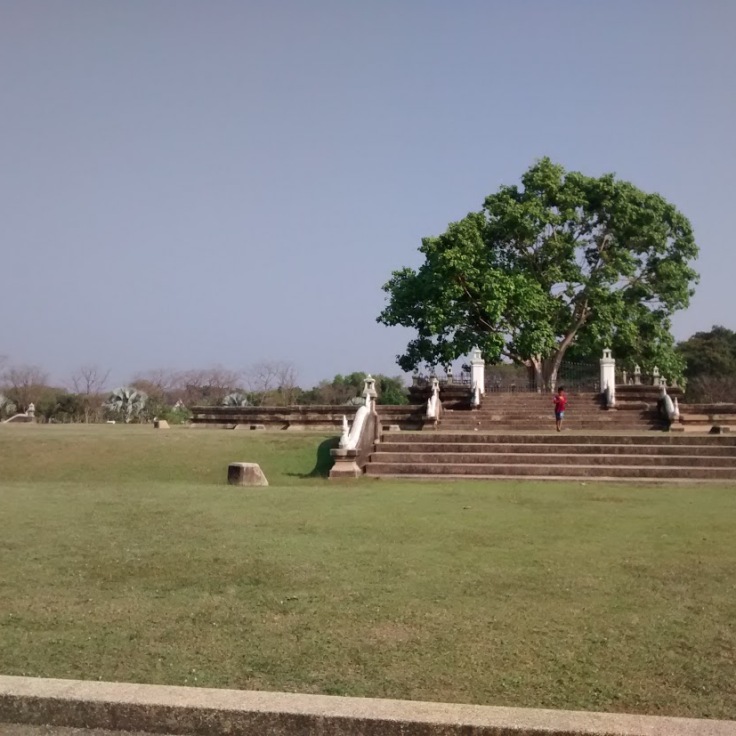 A tree in the park. Given the Buddhist nature of the park, I’m sure it has some significance–though I’m not sure what. 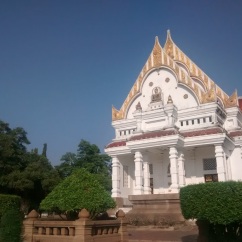 Another building within the park–again, not sure of its purpose

The spot where I had my lunch and read. There were quite a few of these awnings–offering protection from the hot Thailand sun–and many people were relaxing under them the day I was there.

The famous statue of Buddha, at the center of the park

An antique shop in Nakhon Chaisi 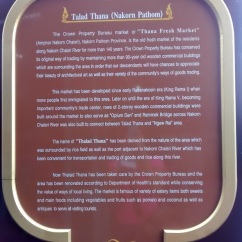 A view of the nineteenth century storefronts

The historic downtown from a bridge above The Chin River

The bottom line: Nakhon Pathom Province is such a culturally rich and fascinating area; while I’m glad it’s not over congested by tourism, I do think more people should consider a visit here. It really is the perfect place for people interested in getting off the main tourist path, especially since it’s so close to Bangkok. That said, I really don’t think the province has a chance of becoming a major tourist location any time soon because of how fiercely loyal the locals are to the culture and livelihood of the area (they rejected a proposal for the Chedi Wat to become a UNESCO World Heritage site a few years ago for these reasons). Perhaps being so close to Bangkok and Ayutthaya, they are also aware of how tourism can affect an area and wish to avoid that. At any rate, a visit to Nakhon Pathom will be a remarkable cultural and historical experience. It doesn’t offer the amazing national park views of Kanchanburi or the remarkable ruins accessible at Ayutthaya, but Nakhon Pathom has a charm all its own; if you’re planning a trip to Thailand, I recommend thinking about including it on your itinerary.

Getting to Nakhon Pathom

There are a few different ways to get from Nakhon Pathom from Bangkok:

1) Hail a Cab–this is undoubtedly the easiest route, but also more expensive. Bangkok taxis do drive to Nakhon Pathom, but you may have trouble getting them to turn on their meter because of the distance (BKK taxi drivers are required by law to use their meters, but often don’t, especially when dealing with foreigners who they think they can scam). If you absolutely must take a taxi, it is an option  but I wouldn’t recommend it as a first choice.

2) Take the train–I’ve never done this, but the 9:20 am train from Hua Lamphong station to Hua Hin stops at Nakhon Pathom. Read more about this here.

3) Take a bus–Buses leave from Bangkok’s Southern Bus Terminal to Nakhon Pathom. The downside to this option is that the southern bus terminal is really far out from the center of Bangkok. You can either take a taxi or a city bus to get here. By the time you do arrive at the station, you’re already practically halfway to Nakhon Pathom.

4) Take a Van–To take a van, you must BTS to Victory Monument. Victory Monument is rather huge and can be slightly confusing if it’s your first time there, but there is a small building on one of the corners where you can go in and buy van tickets for numerous destinations. Find this building. Go inside to the booth that says “Nakhon Pathom” on it and ask for a ticket to Nakhon Pathom. Tickets to Nakhon Chaisi cost 60 baht ($1.86 USD). I’ve never ridden to Nakhon Pathom city from Bangkok because it is about fifteen minutes past Nakhon Chaisi where I lived, but expect a ticket to Nakhon Pathom city to be slightly more expensive than to Nakhon Chaisi. Once you have your ticket, wait at the door by all the other customers and when they call your van, get in! (this may seem rather hurried and confusing, but just keep your ears open). You’ll be cramped in with about twelve other people so it’s not the most comfortable, but it’s relatively cheap and for about and hour ride, it’s not a bad option at all. It’s also a super common way of travel for Thai people, so you’ll be riding as the locals ride!

Once in Nakhon Pathom, taxis, motortaxis, and tuktuks are available for transportation. If you want more freedom to move around at your leisure, I’m sure you can find a place in Nakhon Pathom city to rent a motorbike for your stay.

EDIT: I just read an article  in the Bangkok Post about the military’s efforts to relocate van services from Victory Monument. I have no idea if the military will be successful with this relocation, but given van popularity with passengers, I presume van services will still continue somewhere, regardless of if they are stationed at Victory or not.