Before I get into the nitty gritty of this post, I’m going to clear one thing up–because I know we’re all a little juvenile now and then (right, Trent?). So, for all y’all English speakers of the world (which is probably the majority of the people visiting this site because, well, it’s entirely composed of a words and phrases constructed with the use of the English language), “Ph” does not make the same sound in Thai as it does in English. English speakers know “Ph” to make a sound equivalent to the English “F.” In Thai, this is not the case. In Thai, “Ph” is pronounced as we would pronounce a stand-alone “P.” So, although I’m quite sure some of you have read “Phuket”  with the English understanding that “Ph” = “F” and stifled a giggle, the Thai (and correct) pronunciation sounds like this: “POO-ket”

Let’s all say that together, now: POO-ket

Now that that’s all sorted out, let’s get on with it.

My New Years plans were up in the air for a while. I went from “Maybe Bangkok?” to “Ugh, I love me some Bangkok but I go there all the time. Maybe Chiang Mai.” to “Okay, I love Chiang Mai to pieces but I really want to go some place new and haven’t been down South yet…” and because a group of my friends were already planning to go to Phuket, “Oh, hey, beaching on New Years doesn’t sound half bad…I think I’ll book my ticket!” is what eventually happened.

Phuket, located in the South of Thailand, is the largest island in Thailand and the only island that is also its own province. It’s a major tourist area in Thailand so, quite, frankly, Phuket doesn’t feel much like the Thailand I’ve grown used to at all. It’s incredibly westernized and very expensive. That said, it’s also incredibly beautiful and I’m so glad I was able to experience it over New Years with good friends.

My New Years weekend started on Wednesday, the day before New Years Eve. After a day-long New Years celebration at school, I went home, packed up, and went to catch a van to Bangkok. I arrived at my friend Mo’s apartment and was unexpectedly greeted by a group of TESOL friends whom I hadn’t seen since we all left Chiang Mai at the end of October. They had all come to Bangkok for New Years. After spending the evening with them, the group of us that were going to Phuket in the morning went to bed–only to get up at 4 am for our 6:35 am flight.

Travel was painless and after the flight, we took a one hour van ride to Villarel Heights, our delightful and homey accommodation on the island (So, I’m not one for explicitly advertising on my blog as that is really not what this blog is about, but the owners were so kind and so helpful and truly made our Phuket experience all the more memorable. In conversation with them one day, my blog was brought up and they asked me to write a review for them–I told them I don’t really do reviews on my blog, but that I’d give them a very positive shout out in my Phuket post. Seriously. Villarel Heights was a bit more pricey than your average Joe hostel or hotel, but it was SOO worth it…and I also give a shout out to my friend Nina for finding the place).

From the hotel, we went to Kata Beach–and lied on said beach ALL DAY. That was New Years Even in a nutshell. Basking in the sun until I was too hot to function and then going for a dip in the ocean to cool down. It was incredible and sooo relaxing.

So…this is the part where you may question my age and wonder if I am actually a tired old lady instead of a sprightly young woman of twenty-two. After beaching all day (I tell you, lying in the sun all day is actually exhausting), we got some food, relaxed for a few hours, and then talk commenced regarding what we should do for New Years festivities. Eventually, the group decided to head over to Patong Beach–one of the most touristy areas of Phuket–and brave what they knew would be an incredible crowd, for an incredible New Years to remember. Well, let me tell you–I was just not having that. I was exhausted and crabby from being up early for our 4 am flight and spending so much time in the sun and really just already having an incredibly full day–so while my friends were getting ready for a New Years night on the town, I decided to get ready for bed instead…and I was in bed by 10:00. I know my body and I knew I wouldn’t have had fun out among so any people with my exhausted, anti-social mood–so I do not regret my decision at all. My friends had an incredible night celebrating New Years in Phuket–and I had an incredible night of much needed sleep. I did wake up shortly before midnight at the sound of fireworks–so I was awake to ring in 2016. I watched some fireworks and lanterns being released from the hotel window and promptly went back to bed. #noregrets

And the best part of all this? I was awake and ready for an adventure of a lifetime the next day. We were all up early the next morning–some of us a little hungover. Most of my friends decided to go on a day trip to Koh Phi Phi, a popular island complex near Phuket. My friend Sarah and I decided to take another adventure, though–together, the two of us went on a speedboat tour of Phang Nga Bay, a gorgeous area with beautiful rock formations and so many islands all around us. Our trusty friends at Villarel Heights organized everything for us, so we just had to get up in the morning and wait for a van to take us to the boat launch–which was about an hour away from our our hotel.

The speed boat was a little bumpy and it felt like a roller coaster ride at times and I did get a little bumped and bruised because when I said a little bumpy, I actually meant a lot bumpy, but it was an incredible day…a New Years Day that I’ll remember for the rest of my days.

Early on in the tour, Sarah and I spent some time standing up at the back of boat taking in the beautiful scenery all around us and snapping some selfies in paradise: 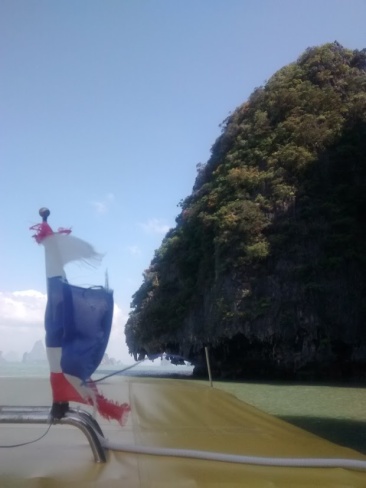 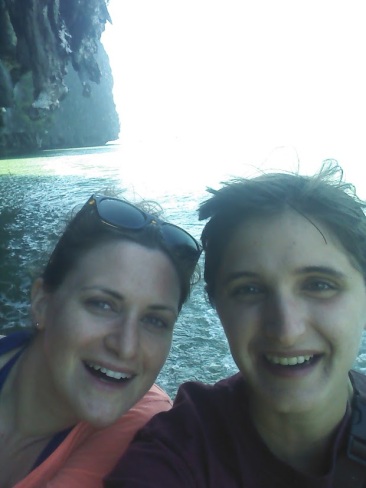 Our stops along the journey included a cave called Ice Cream (really, it’s called Ice Cream Cave); James Bond Island, which is famous for its appearance in the 1974 James Bond film, The Man With the Golden Gun (which I actually haven’t seen, but it’s still an incredible land formation); a floating Muslim village, where we stopped for lunch (and which I really wasn’t a fan of–it felt way too overly touristy and incredibly invasive, as this is a residential place where people live that was clearly taken over for tourist purposes); and a beautiful beach (where I got a piña colada in a coconut, which was DIVINE). The highlight of the trip by far, though, (and I’m quite certain Sarah will agree with me on this) was the time we spent kayaking among some of the rocks and land formations. We got out of the speedboat into smaller boats and were brought around the rocks and formations and into caves. The caves are only accessible during low tide and it was pretty amazing to think that in a few short hours, the place that I was viewing would be covered in water.  Sarah and I were afraid of getting our phones wet, so we didn’t bring them–and hence, have no pictures of our experience–but it was all the more enriching. Because we didn’t have our phones, we were able to jump in the water on a few occasions and revel in the beauty of the world around us. Photos make wonderful memories, but sometimes we get so caught up in capturing the world from behind the camera that we forget to live in the moment. Sarah and I really felt that we were living in the moment and making the most of our experience sans phones, and it was incredible. I also got plenty of other photos throughout the rest of the day to document my experience:

Piña Colada on the beach

Boats at the Muslim Village 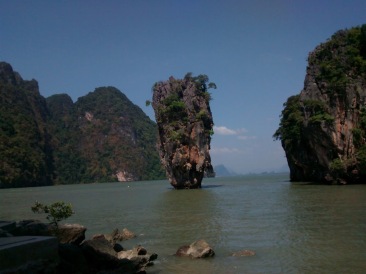 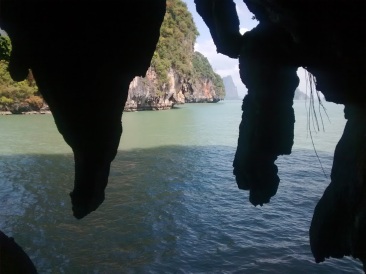 After a long day of adventuring, we had a chill night on New Years Day; the next day, Saturday, was spent beaching again, this time at Nai Harn beach–a bit of an expensive taxi ride from our hotel, but it was so worth it as it is an absolutely gorgeous area.

After  FULL day at Nai Harn, we headed back to the hotel and got ready to go out for dinner near Patong Beach. We had plans to meet one of our TESOL friends, who was also staying on Phuket. From dinner at a delicious Indian Restaurant, we wandered over to Bangla Road, notorious for the hard core party scene in Phuket. Everyone else had already been there on New Years Eve, but I wanted to see it because, well, when in Phuket…We were just going to wander through the road and then leave, but we decided to stay for a little bit longer and went to a bar where covers of American and Chinese pop songs were being sung for the majority of the night.

The next day, we packed up our things and headed for the airport. What a fabulous weekend we had in Phuket, but I was so glad to be back in Bangkok when I arrived. It is only when I found myself back at Victory Monument, ready to hop back into a van back to my town, when I realized how much Thailand has started to feel like home in the last few months. Phuket was wonderful–but it felt so good to be home.

The bottom line? Phuket is beautiful, but be prepared to spend a lot while there. It’s not easy to get around Phuket without the use of overpriced taxis, and everything from food to sunscreen to…well, everything–is more expensive because it is a prime tourist location.

I preferred the quality of the beaches in Koh Samet–not only were the quieter, but there was something about Koh Samet that I can’t really put my finger on that was so magical…something that I didn’t find in Phuket. That said, the views and the land formations in Phuket are truly memorable and worth seeing. If you prefer to explore off the beaten, touristy path, Phuket probably isn’t for you. That said, I had a truly memorable New Years with good friends on Phuket and can’t imagine ringing in 2016 anywhere else.