According to people who have been in Thailand longer than I have and have seen more of the country than I have, Koh Samet is the ugliest of all the Thai islands.

Dear readers, I will let you know that I prefer to think that those people are simply more cynical and jaded than I ever hope to be.

Please, take a look for yourself: 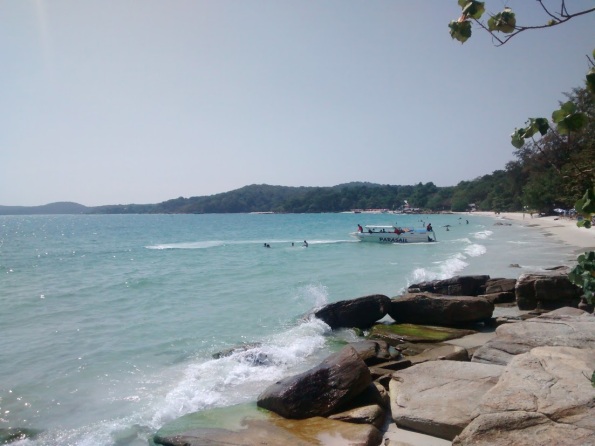 Now, I must admit that my phone’s camera is not the BEST in the world (in fact, by phone camera standards, it’s pretty crappy). And, I must admit that I’ve never been to any other Thai islands (though stayed tuned…a trip to Phuket is right around the corner).

But, dear readers, I digress–you must agree with me when I say, there is nothing about this view that is not pleasing to the eye.

Our trip to Koh Samet fell on the King’s birthday weekend. The King’s birthday falls on December 5–this year, on a Saturday. In his honor, Monday, December 7th was a national holiday. My TESOL friends saw this as an awesome opportunity to take a short vacation. Given its close proximity to Bangkok (a three hour trip by car) and the fact that one of my dear friends lives on the mainland about a half an hour from the ferry launch, we chose Koh Samet as our weekend getaway.

My only words–it was simply amazing.

Friday night after school, I left my town in Nakhom Pathom province and took the forty-five minute van ride to Bangkok. There, I stayed over with my dear friend, Mo, and a few other friends who also met up for the journey at her place–and early the next morning (well, as early as we all managed to get up), we headed for the BTS–one of Bangkok’s many public transportation options–to catch a van at Victory Monument. Our destination? Rayong Province, where the ferry launch to Koh Samet is located.

Some three hours later, after a bit of a bumpy van ride, we were at the pier!

Water! Vast amounts of water! Everywhere! It was so blue! It was breathtaking! It was everything I needed to see right there in that moment–and the adventure was only just beginning.

We arrived on the island around noon on Saturday and pretty much immediately headed to the beach. There, we met up with more TESOL friends who were also staying on the island. Typical beachy things commenced. i.e. sun bathing, swimming, and eating roti (okay, well, I got roti).

A few of us soon decided to go get food (I was starving) and then I went back to our accommodation to battle an upset stomach. Much later, we went back out to the beach, saw a fire show, partook in karaoke with Thai people, and had an all around good time.

Sunday was amazing. Absolutely amazing. The crew rented motorbikes and we took the opportunity to explore the island a bit more. We spent the majority of the day cruising the island and exploring beaches off the main touristy path. It was amazing. It was perfect. I enjoyed every single second of this day with good friends. We ended our beach day by watching the sunset at Ao Prao beach…and it was stunning. I can’t even begin to explain the joy I felt at being in the Gulf of Thailand with some of my favorite people on earth–experiencing the sunset with them and reveling in all that life has to offer. 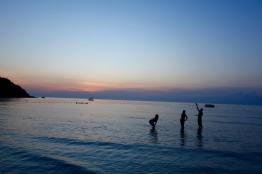 After sunset, we headed back to our accommodation to change from our swim gear and headed out for some dinner. I ended up having an early night because I was sooo exhausted but other people in our group went out for the night.

The next morning, after a delicious breakfast, a group of us headed back to the mainland and hopped in a van for Bangkok–where we parted ways to head back home.

Koh Samet was exactly what I needed on that long weekend. I had been a bit of a funk since settling into my town and getting away and spending time on the beach with my friends made me feel refreshed and ready to tackle whatever life has to throw at me next.

For being the least attractive of the Thai islands, I sure thought it was beautiful…and I had an all around amazing time. 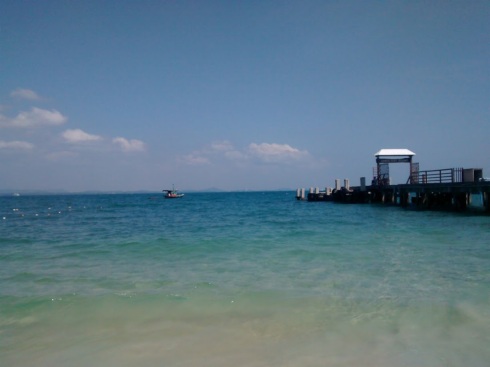 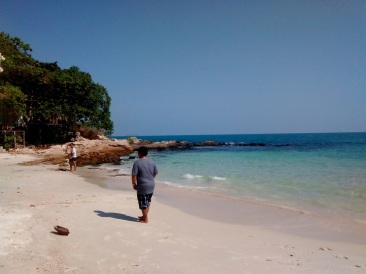