If we were having coffee, I’d tell you that this week has been soooo busy. In a good way. But I’m exhausted and I haven’t even left the country yet!

If we were having coffee, I’d tell you that I saw Passenger in concert this Tuesday with my friend Nicole. We went to dinner beforehand and arrived at the concert fashionably late (for the opener at least). The concert was amazing (aside from the obnoxious and very clearly intoxicated superfan right next to us who was constantly getting in our way). Mike Rosenberg, who is Passenger is so down to earth. Not only was he fabulous live (he sounded exactly like, if not better, than the recording), but he was really quite funny and engaging, also. 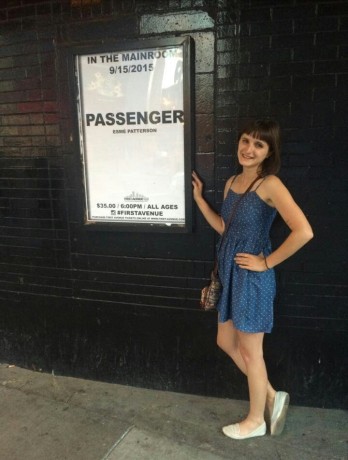 If we were having coffee, I’d tell you about the brush with fame I had after the concert. Nicole and I decided to go to a bar a few blocks down from the concert venue afterwards for some drinks before calling it a night. Shortly after we sat down at our table (on the spacious outdoor patio since it was an absolutely gorgeous night), Nicole all the sudden looked at me really funny and then said with much urgency, “I think that Roger Sterling from Mad Men is sitting right next to us.” Roger Sterling, who is played by the actor John Slattery, that is. Well,  I was in this awkward position where I wanted to see who she was talking about, but the table in question was right behind me; I didn’t want to too obviously turn around to get a glimpse, as that would have been mega awkward. So, Nicole, who was kind of on the verge of freaking out she was so star struck, took a creeper picture for me and sent it to my phone and man it did look a lot like Roger Sterling and we decided we were pretty sure it was him…so she spent the whole rest of the time we were there debating if she should ask him for a picture and finally I said, “Nicole, are you going to regret this for the rest of your life if you don’t do it?” and she said, “Yes, yes I will.” So, before we left, she asked if he was John Slattery, which he affirmed. She got a picture with him and he shook my hand and introduced himself to me, which I thought was pretty cool. I, for one, didn’t get a formal picture with him…but it turns out I got a bit of an informal one since I ended up in the creeper picture Nicole had taken earlier.

If we were having coffee, I’d tell you that my research from my internship last summer has finally been published online. I was so giddy with excitement when I saw the e-mail from my former boss yesterday. The intern’s research is hardly a top priority, hence the year-long wait, and it’s so amazing to finally see it up and running. I’m no longer just a former Smithsonian intern. I’m now a published Smithsonian author (okay, perhaps a stretch…this is a dinky site that most people will never see in their lives…but it’s still fun for me to say).

If we were having coffee, I’d tell you that IT’S THE FINAL COUNTDOWN! a.k.a  I’ve been preparing hard core for Thailand of late because I leave in just a few short days. I got a second new computer (my first new computer, which I told you about in this post, was having issues so I needed to return it) and am so excited to bring it with me on my adventure. I actually like it way more than the first one I got. It was a bit more expensive and more money than I was planning on initially spending, but I can already tell it’s so worth it…It’s better quality overall, is easier to type on, and has a lot more memory than the first computer I bought. I think it will come in handy for teaching, too. I also bought a travel backpack the other day as I didn’t want to have to be carrying a big huge bulky suitcase around multiple airports in multiple countries, especially with my eleven hour layover in Hong Kong.  I still have some things to pick up and get sorted out and of course I have to pack, but every little bit counts, ay?

If we were having coffee, I’d tell you about my coffee date yesterday with one of my best college friends who was in the Twin Cities for a couple days. This is only the second time I’ve seen her since graduation and it was so great to sit and chat and be merry together with Americanos in hand.

If we were having coffee, I’d tell you that my last day of work is on Sunday. It’s bittersweet. I’ll miss work, but it’s time for this new adventure.

If we were having coffee, I’d tell you that I woke up extremely anxious on Wednesday morning. I haven’t felt so anxious in months. It’s been an on and off feeling for the last couple days and I know it’s because I’m getting nervous. As exciting as this new adventure is going to be, it’s also incredibly scary. I’m going to a foreign country with a completely different culture and language and oh, of course I know I will be fine and I’ll have such an amazing time. But it’s still a big life change. And these nerves–my upset stomach and the ache in my chest–there’s nothing wrong with any of it. This journey isn’t going to be easy. And that’s why I know I have to take it.

If we were having coffee, I’d be about ready to switch it off to you–and I’d ask you if you have anything to share over coffee.

38 Replies to “#WeekendCoffeeShare–My Brush With Fame, THE FINAL COUNTDOWN, and Other Stories”